PRESERVATION OF MODERN HOMES AND BUILDINGS

"Preservation is not for sissies" – Kelly Lynch, American actress, who with her husband Mitch Glazer restored Richard Neutra's Oyler house in Lone Pine, Cal.
At some point in their life, many people recognise that "new" does not necessarily mean "improved".

For anyone involved with Modern Architecture, sooner or later the preservation aspect comes up: for an architect, a builder, a buyer, a broker and a seller. From experience, Tobias knows from experience that preservation starts – whenever possible – mostly with a seller choosing the right buyer.

And through his own encounters with modernist architects – practitioners such as Ken Miller, Dan Duckham, Don Singer or Chuck Reed – through colleagues and through his involvement with non-profit organisations, Tobias Kaiser became very much aware of the necessity to promote preservation. Some recent examples are below.

Since you are on this page and thus seem to be interested in the subject, please also consider engaging in the current preservation campaigns listed at the bottom of the page. Thank you!

The City of Miami has successfully made the restoration of the Marine Stadium a priority. Can you support them please by sending a quick missive to the City Commission? You don't even have to write it! Just visit The National Trust for Historic Preservation - many thanks!

The Miami Marine Stadium was built on Virginia Key as the first purpose-built venue for powerboat racing in the United States. It opened on December 23, 1963; construction cost was $1 million.

The 6,566 seat stadium was designed by architect Hilario Candela, a then 28-year-old immigrant from Cuba. It is considered a Modernist icon because of its cantilevered, fold-plate roof and its construction of lightweight, poured-in-place concrete. At 326 feet in length (longer than a football field), it was the longest span of cantilevered concrete in the world when it was built.

The stadium hosted many world-class powerboat events, as well as numerous cultural events and concerts, such as Jimmy Buffett, Queen, The Beach Boys, Steppenwolf, Dave Brubeck, Miami Philharmonic, Ray Charles and many more (while still a Florida visitor in the 80s, Tobias saw a concert on the stadium's floating stage - an unforgettable event at a spectacular venue).

In the wake of Hurricane Andrew, it was declared unsafe and shuttered by the City of Miami on September 18, 1992.  An engineering study demonstrated it was sound and not damaged by the hurricane but it was closed to the public, nonetheless. Since then, the stadium has become a haven for vandals, graffiti artists and taggers.

Since 2008, when Friends of Miami Marine Stadium (FMMS) was formed, preservation efforts are seriously under way and recently made major progress. The building now has a historic designation by Miami’s Historic Preservation and Environmental Board, is recognized as an Architectural Masterpiece by the National Trust for Historic Preservation, and is on the Watch List of World Monuments Fund.

Please visit the website of the Friends of Miami Marine Stadium, where you will find much more information and also can get involved in the preservation effort.

Impressions of a Miami AIA panel discussion in May 2015 about the preservation status quo are on the blog The Modernist Angle.

In early 2016, the village of Key Biscayne was not successful in blocking the February 2016 Miami Boatshow from taking place at the Marine Stadium. If Key Biscayne's (lovely) motion sounds a bit like "Dear St. Florian – save our house, please light up another one!" or NIMBY, you are right. More on this development here. 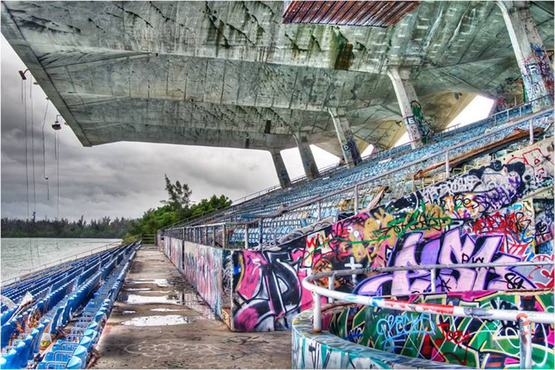 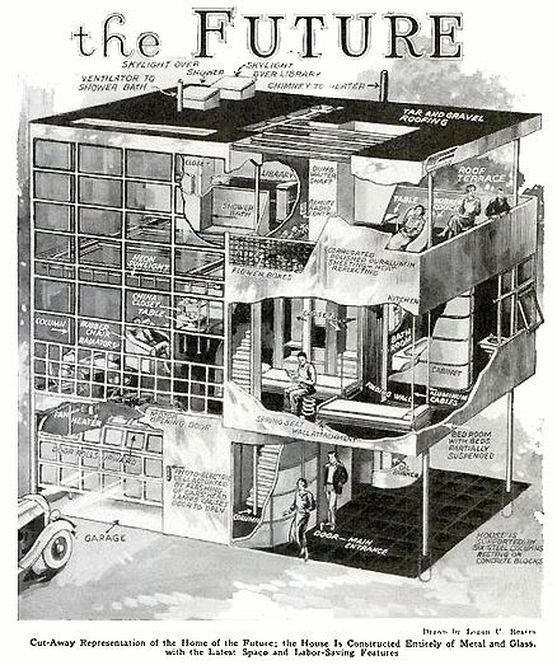 Not to be missed when talking Preservation is the Aluminaire house, the US' first all-metal house designed 1930-31 by Albert Frey and Lawrence Kocher.

Several times in the 1940s it was moved and unfortunately also heavily remodeled with additions. As of 2017 there is a campaign under way to relocate the house, currently in storage, to a permanent location in Palm Springs, CA, where Frey also lived for many years.

More details here soon, in the meantime find the latest on the Aluminaire website. 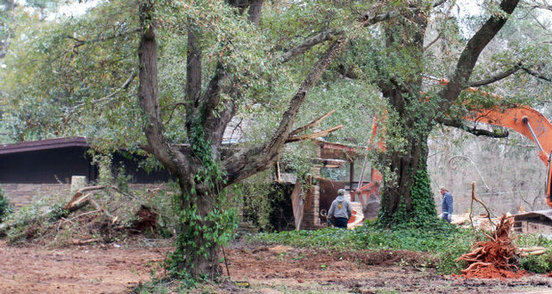 The 1950 Paschal House on 3334 Alamance Drive, one of Raleigh's most important mid-century Modernist houses, has been razed on 1 March 2013 on request of the heirs with plans to subdivide the lot, after Preservation North Carolina and Triangle Modernist Houses, the leading North Carolina Non-Profit for the preservation of modernist architecture, lost an eight-year battle to save it.

Designed by NCSU professor James Fitzgibbon, a colleague of Buckminster Fuller, the house was occupied for almost 60 years by the original owners. Frank Lloyd Wright observed after visiting the house in 1950 that “it does the cause [of modern architecture] good.”

The large property, located on a prime lot just under three acres, has been vacant since 2007. The Paschal heirs first priced the property over $5m, and last at $3.3m, but still above the estimated market value of $2m to $2.7m.

The family denied public tours (common and cherished in the Raleigh area) which could have brought many interested parties; refused to subdivide the large lot, which would make the house much more affordable and attract buyers; refused a design competition, which would tap into the very active local architecture community, and refused to meet with TMH or other interested parties to discuss options.

Now that the house is demolished, the heirs plan to divide the lot for five new homes, a move that has angered preservation groups that said the house still had a chance at restoration.

Thank you for your help and support if you signed the petition to save this property. Unfortunately, all efforts were in vain this time. 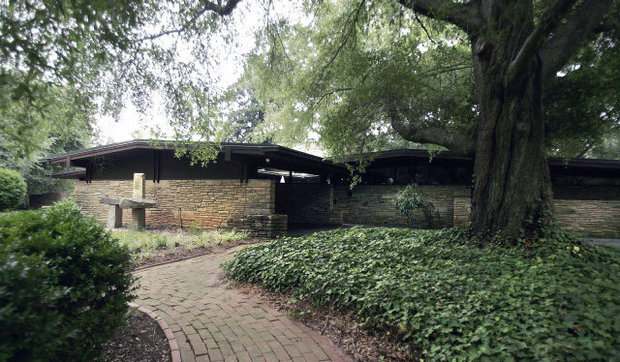 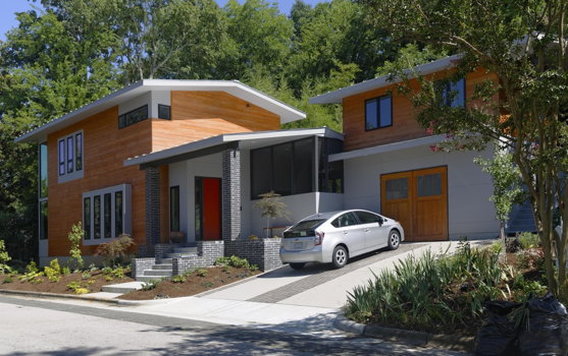 A new house in need of preservation – what the ...?

But demolition is what was threatening this brand-new house before it was even completed, because a neighbour – obviously without taste or anything to do – objected through multiple court hearings to it's style. A house that Paul Goldberger, the former architecture critic of the New York Times, called "an example of modern architecture trying hard, very hard, to be on its best manners—in essence, to be a good neighbor."

Luis and his wife Marsha showed me the house just before it was finished, and it is lovely, quite in contrast to the plaintiff's nondescript structure directly opposite.

In February 2016, the NC Court of Appeals found that the neighbour, a Gayle Wiesner, had no legal standing and ruled in favor of Cherry/Gordon.

In March 2016, Wiesner appealed again at the NC Supreme Court level, which declined to rule on the case in August of 2016.  The matter appeared to be closed.

Not satisfied with the outcome and still nothing better to do, in February 2017 Wiesner appeared before the Raleigh City Council concerning final approval of Developmental Guidelines for all Raleigh Historic Districts (not just Oakwood). After nearly ten years of public input and hearings, and countless RHDC meetings, the Oakwood group put forward a last-minute revision to eliminate any discretion on RHDC's part.

The City Council remanded this back (yet again) to RHDC and it will be discussed at Council (yet again) in March 2017. Stay tuned on North Carolina Modernist Houses. 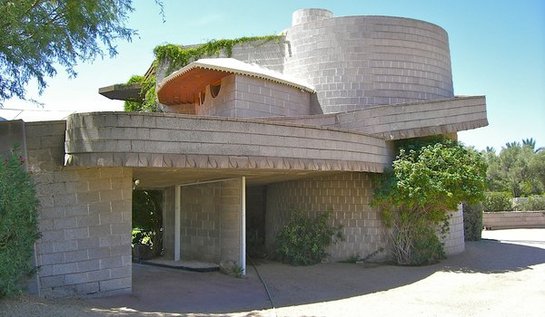 
The David and Gladys Wright House in Phoenix, designed by David's father Frank Lloyd Wright, is threatened to be razed by a builder. A buyer withdrew his bid on Veterans Day, and the house is on the market again, according to the LA Times.

A detailed NYTimes piece is here; please sign the petition to save the house here 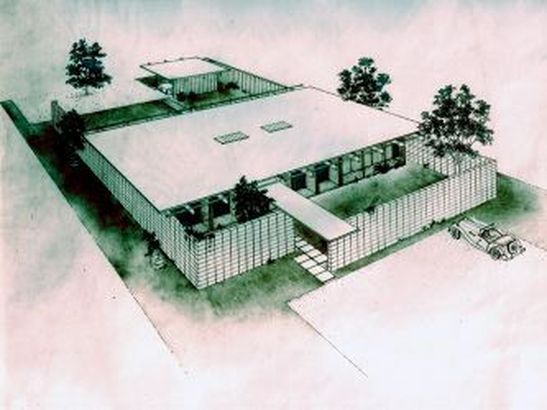 Commissioned in 1960 and expanded from ca. 1440 sf to 1871 sf by Reed, who explained how he designed the house for maximum airflow when temperatures allow, but also to be "buttoned up" with ease in inclement weather. Typical for modern architecture, facing the quiet street the home is private and secluded, but towards the lush garden it allows ample light and ventilation. Other modernist elements include the use of concrete block similar to Don Singer's style, (partially) concrete floors dyed in the aggregate and clerestory windows. To the back, the lot is framed by a carport accessible from an alley way. Sold in October 2012 to an architect and his wife. 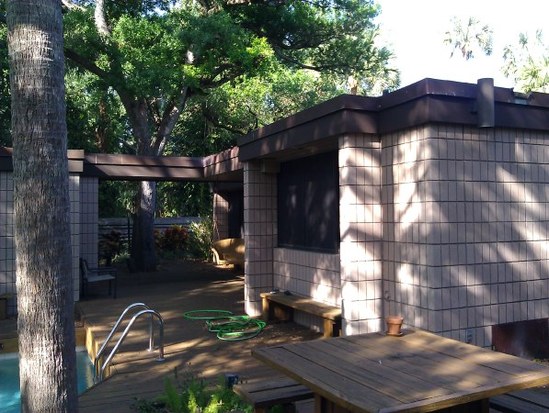 Showing typical Don Singer elements, the house sits on a double lot in Shady Banks surrounded by old Oak trees and in the neighbourhood of several other Singer designs. Entry is through a courtyard with swimming pool, which also allows faces the L-shaped living room and kitchen. The home in unaltered original condition, including Cuban tile floors poured on site, was last sold in October 2013 and is very carefully being updated. 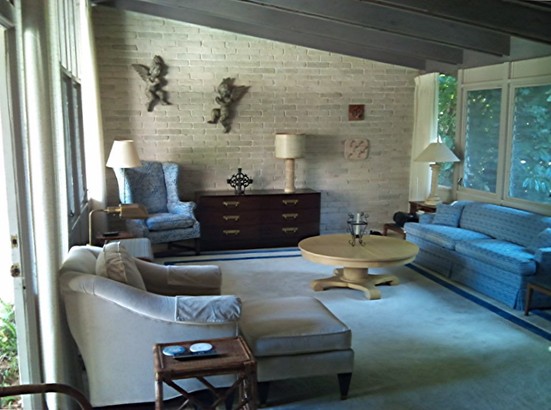 The Hunt residence, a distinctive mid-century modern home, is one of modernist architect Byron Simonson's last remaining residential projects. Simonson, a protegée of Addison Mizner, designed several outstanding buildings in the area, including the Colony Hotel in Palm Beach and the former La Coquille Club in Manalapan. The home is situated on a double corner lot on Hypoluxo Island, with mature trees, a secluded garden and a pool. Modernist period details such as the original terrazzo floors, jalousie windows to direct the sea breezes and high vaulted ceilings made of cypress are still intact. There is a public right of way to the Intracoastal across the street; the ocean is three blocks away. Sold in April 2012 to a couple from Chicago, an extensive (modern) remodel/expansion was completed in spring 2014, which altered the house beyond recognition.
Are you interested in becoming involved in the preservation of modern architecture?

On a regional level, North Carolina's NC Modernist Houses has made incredible strides on the local and regional level in and around the Triangle region of Raleigh, Durham and Chapel Hill for the documentation and promotion of modernist architecture. Tobias is a long-time supporting member of NCMH.

On a national basis, at the very least these three organisations are worth considering:
Noticeably absent unfortunately seem to be the American Institute of Architects (AIA) and their state chapters – perhaps they are just too polite to raise their voice?

If you consider buying or selling a modern home and are not quite sure if the object of your desire is worth preservation love, you are warmly invited to contact Tobias at any time.

___
Site design and contents ©Tobias Kaiser 2007-2021. Any publication, reproduction or use only with written permission.